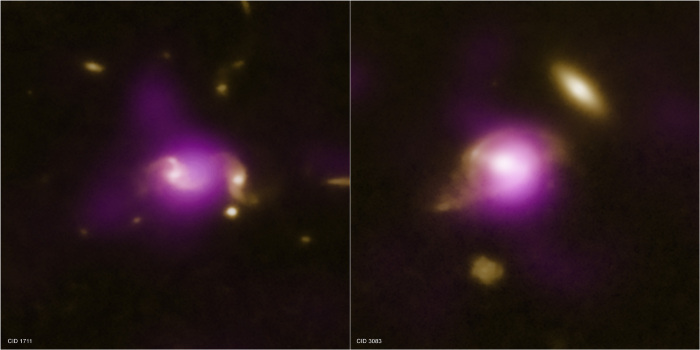 Formation of a Supermassive Black Hole

Astronomers have used a large survey to test a prediction that close encounters between galaxies can trigger the rapid growth of supermassive black holes. They found that the galaxies in the early stages of an encounter with another were more likely than isolated galaxies to have actively growing black holes in their cores. These two composite images show a sample of the pairs of galaxies that are undergoing close encounters in the survey. In these images, the data from NASA's Chandra X-ray Observatory are shown in purple and Hubble Space Telescope data are in gold. In both images, the point-like X-ray source near the center is generated by gas that has been heated to millions of degrees as it falls toward a supermassive black hole located in the middle of its host galaxy. The other faint X-ray emission may be caused by hot gas associated with the pair of galaxies.