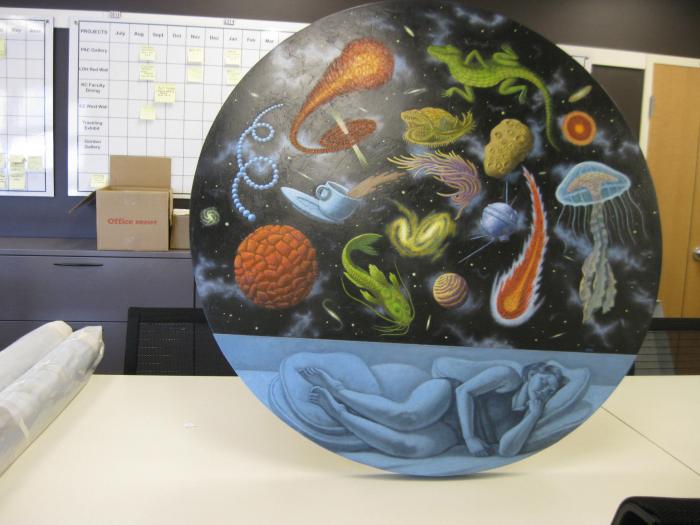 A Theory of Everything

Oil and Wax on Panel

A circular painting with a blue and black background. In the lower all blue section there is a young women laying on pillows. In the upper section there is a variety of multi-dimensional objects. The object appear to be drifting through space.

"To think about human beings and our relationship to the cosmos can often lead to far fetched and even mind-boggling speculation. The more data we uncover about the universe, the more fantastic our situation appears. Information and discovery alters our understanding of metaphysics and religion;it causes us to re-evaluate our position and role in the scheme of things. Yet the question remains: How can we possibly know anything about ourselves without knowing our origins? Time and timelessness, multiple universes and other dimensions, the origin and fate of our universe- these are but a few of the life-changing topics that cosmologists and physicists are investigating. Presenting material of this sort in an artistic context is fraught with problems, but my desire for awe and mystery overpowers common sense and fear of embarrassment. I have tilled my current series of paintings "A Theory of Everything." I am referencing ideas that have been discussed by cosmologists and astrophysicists: the creation of a theory that can unify the theory of general relativity and quantum mechanics. However, I have used the phrase in a more general and creative way to suggest to a world where I explore the relationship of humans to the cosmos. In my recent work I create an imaginary space where scale can be manipulated and the sense of time can be compressed. By juxtaposing the world of the very large (macrocosm) and the world of the very small ( microcosm), I can create analogies between celestial bodies and microorganisms. I can also pretend to view the universe sub speci aeternitatis, or from the perspective of eternity, by presenting cosmological events from the distant past with fully evolved humans from our own time. In this way, past, present, and, future, can be condensed into a magical pictorial space. The circular format of the work was chosen because of its reference to telescopes, microscopes and mandalas. These images from science and religion can more easily coexist in an artistic context then they can in the rational world. Of course, many cultures consider consider the circle a symbol for eternity, so it seamed appropriate to use this format in order to represent the universe.In addition to astronomical images and microorganisms, I also depict objects of nature and the human figure. Presenting a plethora of creatures from the natural world ( both extinct and surviving) speaks to the evolutionary processes that formed humans. For such processes to reach the current stage, they require vast amounts of time that are almost inconceivable to the human mind. Like Kant's antinomies, thoughts of this sort are perhaps more than the imagination can comprehend; they end up in configurations and yet hold the potential to stimulate new and original thinking." - Jay Constantine