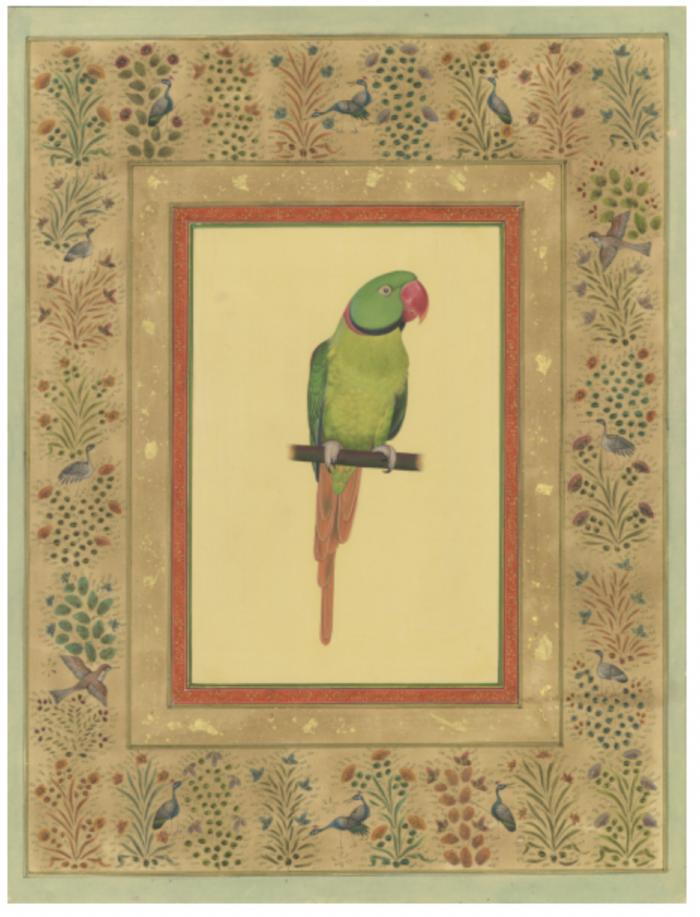 Original in PDC. Green parrot with orange and brown border filled with birds and flowers.

Mughal Emperor Jahangir (1605-27) encouraged his royal atelier to take up the single point perspective favored by European artists, unlike the flattened multi-layered style used in traditional miniatures. He particularly encouraged paintings depicting events of his own life, individual portraits, and studies of birds, flowers and animals. Each figure has its own importance in the state of Rajasthan—elephant symbolizes strength; Lion symbolizes bravery; Camel for patience; Horse for progress; Peacock for love and Cow for prosperity. In Islamic culture, flowers are often seen as symbols of kingdom of God; the Persian poets describe them as springing forth from the waters of paradise.

Indian Art consists of a variety of art forms, including plastic arts (e.g., pottery and sculpture), visual arts (e.g., cave paintings), and textile arts (e.g., woven silk). Geographically, it spans the entire Indian subcontinent, including what is now India, Pakistan and Bangladesh. A strong sense of design is characteristic of Indian art and can be observed in its modern and traditional forms.

The origin of Indian art can be traced to pre-historic Hominid settlements in the 3rd millennium BC. On its way to modern times, Indian art has had cultural influences (e.g., Indus Valley and Hellenistic), as well as religious influences such as Hinduism, Buddhism, Jainism and Islam. In spite of this complex mixture of religious traditions, generally the prevailing artistic style at any time and place has been shared by the major religious groups.

In historic art, sculpture in stone and metal, mainly religious, has survived the Indian climate better than other media, and provides most of the best remains. Many of the most important ancient finds that are not in carved stone come from surrounding, drier regions rather than India itself. Indian funeral and philosophic traditions exclude grave goods, which are a main source of ancient art in other cultures.