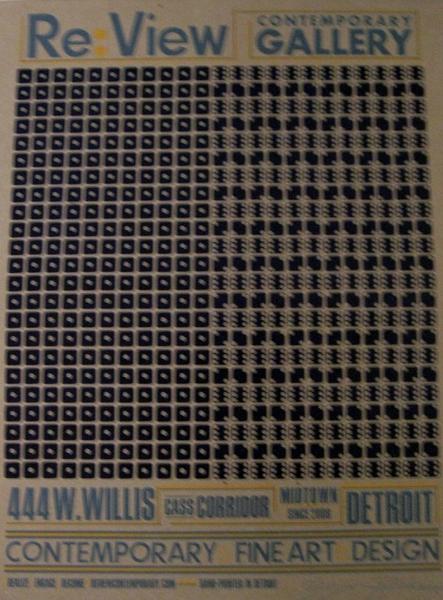 Bryan Christopher Baker is a contemporary printmaker specializing in letterpress and relief prints. He has his own studio in the Corktown Area of Detroit, Michigan; having recently relocated from New York City, New York. Outside the studio he has taught many classes and workshops at various schools and institutions across the country. For the Re:View Contemporary Gallery's third anniversary show in January of 2012, he was invited to design "a limited-edition print inspired by Re:View's mission". The gallery was opened in Cass Corridor in Midtown Detroit in 2008 and has been described as a "transformative force in the environment", serving as a "connector between the community and the artists that have found their inspiration in the city." Owner and Director Simone DeSousa writes, "By reviewing art's possibilities in the city of Detroit, we're restoring its innate powers...Together, we are truly creating something significant that belongs to our city, and reaches beyond."