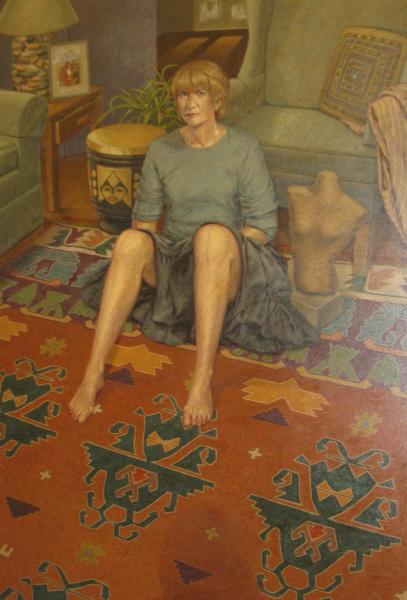 Image of woman sitting against a green chair in blue skirt and dark blond hair, with both knees up.

"This image is of Joan Newberry, who had double knee replacement surgery six months before posing for this painting. "Merchant View" is a medical term for this particular view of the knees. The shadow in the foreground is a reference to an Apache legend. The earth-goddess, Changing Woman, never grew old. When the goddess began to age she would walk east until she saw a young version of herself walking towards her. The two would continue walking until her aging self and young self merged. She would then return home, renewed. In this painting, Joan encounters her young self coming towards her. She is about to arise on her new knees and walk forward to merge with her younger self and become renewed." - Ed Wong-Ligda