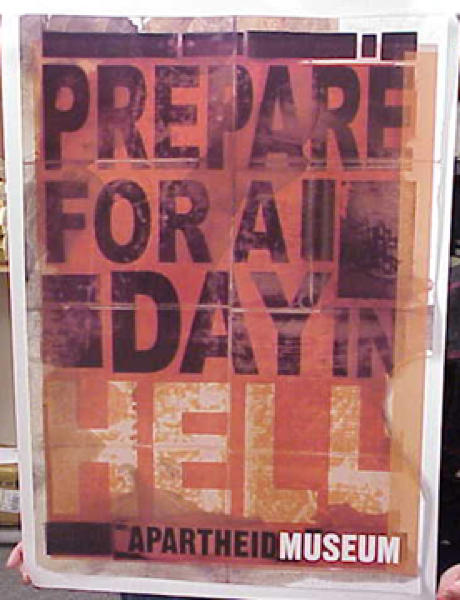 Prepare for a Day in Hell

Poster image with text treated to look old and weathered.

The Apartheid Museum is a museum complex in Johannesburg, South Africa dedicated to illustrating apartheid and the 20th century history of South Africa. Apartheid, meaning separateness, was a system of legal racial segregation enforced by the National Party government in South Africa between 1948 and early 1994. This segregation began in colonial times, but apartheid as an official policy was introduced following the general election of 1948. New legislation classified inhabitants into racial groups ("black", "white", "coloured", and "Indian"), and residential areas were segregated by means of forced removals. From 1958, blacks were deprived of their citizenship, legally becoming citizens of one of ten tribally based self-governing homelands called bantustans, four of which became nominally independent states. The government segregated education, medical care, and other public services, and provided black people with services inferior to those of whites.