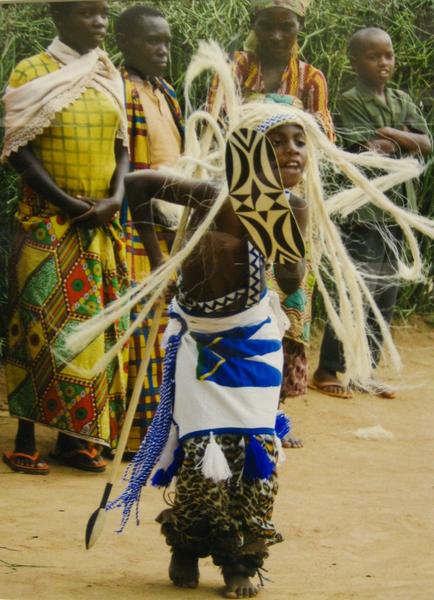 Digital photograph of a group of young children, one stands in the front dancing. He wears a leopard print around his waist, there is also a white and blue cloth wrapped around his waist. He holds a spear and shield, he wears a blond wig. Children in the back watch.

For over a century people have been widely exposed to photographs documenting war and conflict in countries half a world away. Much less common are intimate, visual updates revealing where those war-torn communities are years after peace is reached. This series of images illustrates a post-war era for tow regions in East Africa- Northern Uganda and Rwanda- both having experienced atrocities where their own countries' people brutally turned on one another. Over a four-month period, I have documented both triumphs and struggles experienced from individuals as well as the larger communities. Though each region's conflict and recovery are different, they share many similarities. Song and dance have played a huge part in the rehabilitation process, uniting their people once again through cultural traditions. Both Uganda and Rwanda have overcome great loss and pain.