Carl Abrahams started his career as a cartoonist before he became a painter. He explored themes from the Bible and Greek classics through out his entire career as an artist. He received national honors during his lifetime including the Order of Distinction and the Gold Musgrave Medal. Two of his religious works were also made into Jamaican stamps. 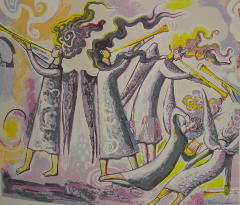