Oskar Kokoschka was an Austrian artist, poet, and playwrite best known for his intense, expressionistic portraits and landscapes. His career was a turbulent one, having served in World War I and being wounded during the conflict. After his return from fighting, Kokoschka continued to develop his career and completed some of the works considered to be his masterpieces. However, during the outbreak of the Nazi Regime, Kokoschka was labeled a degenerate artist and forbidden to produce art work. He then fled to Prague, and it would be twelve years until he became a British citizen in 1946. Eventually, Kokoshka settled in Switzerland and continued to produce work until his death. 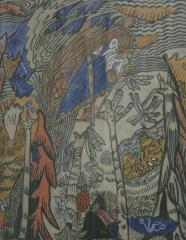