Chikanobu Yoshu was a woodblock print artist from the end of the 19th century. He was one of the most prolific woodblock print artists of this period, working with both traditional subjects, such as actors, courtesans, scenes of famous sites, beautiful women, and with topical subjects, such as war and rebellion. Born into a samurai family in Echigo province, Chikanobu became one of the final, great, ukiyo-e artists aiming to preserve the traditional culture of Japan at a time when the country was becoming rapidly modernized. As a child, he studied Kano style painting. When he moved to Tokyo he studied print design first at the studio of Kuniyoshi Utagawa (1797-1861) and later on at that of Kunisada I Utagawa (1786–1865). Even though Chikanobu’s prints showcase a variety of subjects, due to the wealth of his beauties and court ladies works, it is believed that the customs and events of the imperial family were his favorite subject. Out of these prints, the most well-known series is probably ‘The Inner Palace of Chiyoda’ (‘Chiyoda no O-oku’), which depicts the court life in the palace of the Tokugawa shogunate. Influenced by the rapid changes happening in Japanese society following the Meiji restoration, Chikanobu also produced beauty prints showing ladies in Western clothing, as opposed to kimono. Chikanobu's last works in the early years of the 20th century featured brave samurai and heroic women of Japan's past, models of appropriate behavior for the future. 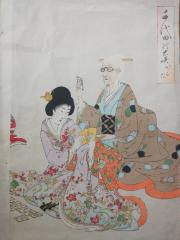