Born in Carrefour near Port-au-Prince on July 1 1919, he was a wood carver (carving small decorative animals) and an engraver before turning to painting by entering the Centre d'Art in 1948. In 1951 he completed a mural (:La Visitation:) at the Cathedrale Ste. Trinite de Port-au-Prince. At the beginning of the 70's he left Haiti to join his family abroad. he did not return until twenty years later. His works often feature the old style "Gingerbread" house one can still see in the country, as well as jungles and imaginary trees full of fruits and flower. Pierre has exhibited in the United States and Europe. Fernand Pierre died in 2002. 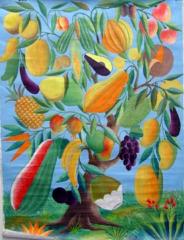