Michael Graves (July 9, 1934 – March 12, 2015) was a noted American architect and designer of consumer products. As well as principal of Michael Graves and Associates and Michael Graves Design Group, he was of a member of The New York Five and the Memphis Group — and professor of architecture at Princeton University for nearly forty years. Following his own partial paralysis in 2003, Graves became an internationally recognized advocate of health care design. Graves' global portfolio of architectural work ranged from the Ministry of Culture in The Hague, a post office for Celebration, Florida, a prominent expansion of the Denver Public Library to numerous commissions for Disney — as well as the scaffolding design for the 2000 Washington Monument restoration. He was recognized as a major influence on architectural movements including New Urbanism, New Classical Architecture and particularly Postmodernism — the latter including the noted Portland Building in Oregon and the Humana Building in Kentucky.[5] For his architectural work, Graves received a fellowship of the American Institute of Architects as well as its highest award, the AIA Gold Medal (2001). He was trustee of the American Academy in Rome and was the president of its Society of Fellows from 1980 to 1984. He received the American Prize for Architecture, the National Medal of Arts (1999) and the Driehaus Architecture Prize (2012). 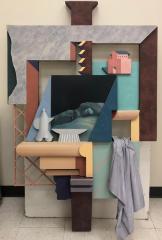