Born in Germany studied at the Gallery of fine arts in Nureberg. Served as a director of publishing in Munich- forced to flee in 1933. Worked with french artists and served in the french army. in 1941 he moved to the united states and became a citizen in 1948. He taught as a professor at Pratt and Yale school of art. 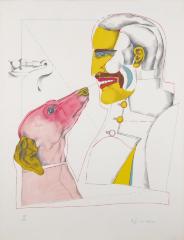 Dog, The Best Friend of Man