Fourgasse is the penname of the British cartoonist Cryil Kenneth Bird. He worked for the British magazine Punch starting in 1916, he eventually was promoted to art editor from 1937-1949 before being promoted to head editor till 1953. During WW2 he worked with the British Ministry of Information to design propaganda posters. His most famous posters were his "Careless Talk Costs Lives" series. He was awarded the honor of "Commander of the Order of the British Empire" in 1946 because of his service to his country. Fourgasse also co-published several humor novels. 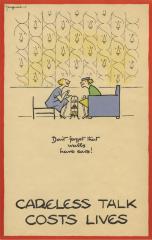