"Alphonse Maria Mucha was born in the town of Ivancice, Moravia (today's region of Czech Republic). His singing abilities allowed him to continue his education through high school in the Moravian capital of Brünn (today Brno), even though drawing had been his first love since childhood. He worked at decorative painting jobs in Moravia, mostly painting theatrical scenery, then in 1879 moved to Vienna to work for a leading Viennese theatrical design company, while informally furthering his artistic education. When a fire destroyed his employer's business in 1881 he returned to Moravia, doing freelance decorative and portrait painting. Count Karl Khuen of Mikulov hired Mucha to decorate Hrusovany Emmahof Castle with murals, and was impressed enough that he agreed to sponsor Mucha's formal training at the Munich Academy of Fine Arts. Mucha moved to Paris in 1887, and continued his studies at Académie Julian and Académie Colarossi while also producing magazine and advertising illustrations. Mucha produced a flurry of paintings, posters, advertisements, and book illustrations, as well as designs for jewellery, carpets, wallpaper, and theatre sets in what was initially called the Mucha Style but became known as Art Nouveau (French for 'new art'). Mucha's works frequently featured beautiful healthy young women in flowing vaguely Neoclassical looking robes, often surrounded by lush flowers which sometimes formed haloes behind the women's heads. Czechoslovakia won its independence after World War I, Mucha designed the new postage stamps, banknotes, and other government documents for the new state. When German troops marched into Czechoslovakia in the spring of 1939, Mucha was among the first people to be arrested by the Gestapo. During the course of the interrogation the aging artist fell ill with pneumonia. Though eventually released, he never recovered from the strain of this event, or seeing his home invaded and overcome. He died in Prague on July 14, 1939 of a lung infection, and was interred there in the Vyšehrad cemetery. " 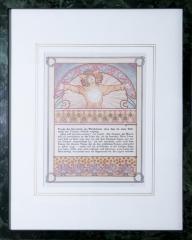