"Edvard Munch was born in Norway in 1863, and was raised in Christiania (known as Oslo today). He was related to famous painters and artists in their own right, Jacob Munch (painter), and Peter Munch (historian). Only a few years after he was born, Edvard Munch's mother died of tuberculosis in 1868, and he was raised by his father. Edvard's father suffered of mental illness, and this played a role in the way he and his siblings were raised. Their father raised them with the fears of deep seated issues, which is part of the reason why the work of Edvard Munch took a deeper tone, and why the artist was known to have so many repressed emotions as he grew up. From about 1892, to 1908, Munch split most of his time between Paris and Berlin; it was in 1909 that he decided to return to his hometown, and go back to Norway. During this period, much of the work that was created by Edvard Munch depicted his interest in nature, and it was also noted that the tones and colors that he used in these pieces, did add more color, and seemed a bit more cheerful, than most of the previous works he had created in years past. The pessimistic under toning which was quite prominent in much of his earlier works, had faded quite a bit, and it seems he took more of a colorful, playful, and fun tone with the pieces that he was creating, as opposed to the dark and somber style which he tended to work with earlier on during the course of his career. From this period, up to his death, Edvard Munch remained in Norway, and much of his work that was created from this period on, seemed to take on the similar, colorful approach which he had adopted, since returning home in 1909." 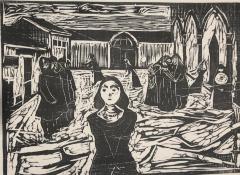