From Columbus, Wisconsin William K. Hosken "TOWN OF COLUMBUS Source: The History of Columbia County, Wisconsin, An Account of Its Settlement, Growth, Development and Resources (1880) transcribed by Mary Saggio. WILLIAM K. HOSKEN, photographer, Columbus; was born in London in 1836; is the son of James and Mary Hosken; when about 7 years old, he began the study of drawing and art in his native city, and devoted his attention to that study more or less of the time there till 1857; emigrating then to America, he located at Altoona, Penn., and there followed various kinds of business for awhile; he next resumed his travel, which he continued over many of the States; in 1862, he located at Madison, Wis., and there, in 1865, began work at photography; in the latter part of 1866, he removed to Oconomowoc and continued this business there till 1869, when he removed to Milwaukee; he came thence to Columbus in 1873, opened a studio and has since continued his profession in this city, doing work also in crayon, water-colors and pastel. He was married in 1866 to Miss Angeline Stowe, of Sun Prairie, Dane Co., Wis.; their children are Charles L., Edith A. and Emma J. They are connected with the Universalist Church." 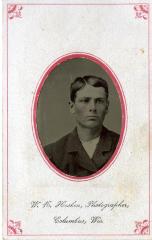 Untitled (Portrait of a Man)