From Valpariso, Indiana Owned Whipple Studio. Also believed to have operated Star Studio on college hill. His work is imprinted with "Whipple" "Whipple studio", "Photo art studio", "The star studio". The federal census listed his occupation as a piano tuner. Later he moved to Chicago and opened a studio there. By 1908 he was working as a real estate agent- he would later move to st. Lewis and work as a business manager. Born 1857- could not find record of him after 1920. 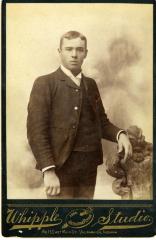