From Grand Rapids and Lansing, Michigan. Sharpsteen, Samuel, photographer, 88 Wonderly bldg., Grand Rapids, MI (1894) Polk's Grand Rapids Directory "born near Battle Creek, Mich., 10 June 1850 Samuel L. Sharpsteen was educated in the public schools of Battle Creek, and remained with his parents until twenty years of age, when he apprenticed himself in the art, as far as it was then known. He then went to Owosso,Mich., and in partnership with his elder brother opened a gallery. The partnership lasted but six months, when the subject became the sole proprietor and carried on a successful business until 1882, when he removed to Ionia, where he remained eight years; he then passed one year and six months in Detroit, thence he came to Grand Rapids and stands today as the leading photographer of the city. " 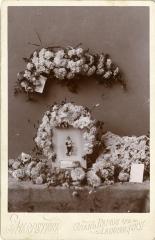 Untitled (Memorial for a Child)