Livinus van de Bundt was educated at the Royal Academy of Fine Arts in The Hague, the Netherlands. He lived and worked from 1952 until his death at the estate De Voorde in Rijswijk. He was married to the ceramist Mieke van der Burgt (1917-1979). On November 1, 1947 in The Hague, he founded the Free Academy of Visual Arts Workshop, of which he was director until 1964. At first he mainly did etchings and woodcuts, but in the sixties developed as an avant-garde artist. He experimented with light sources and light conductive and photosensitive materials, calling himself a "light artist". 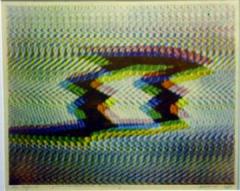