Beverly Adams, a resident of Crystal, MI, is becoming known as one of Central Michigan's emerging realist painters. She began her career as a graphic artist in East Lansing, MI, and though it was successful, she was professionally and personally frustrated by the limitations of the job. So she attended MSU, got a degree in Industrial Design and planned a very different future. After a hernia (and four years of couture sewing). she started a decorative painting business and never stopped painting. Eventually, with the move to Crystal, she eased into fine instead of decorative painting, and found her true path. Since then, she has had her work in competitions, won a few, shown in museums, in Art Prize, been published and sold all over the country. Her work is in the realist tradition, verging on tompe'l'oil (or fool the eye), and her inspiration is very much in the 17th century Dutch still life and lforal tradition. 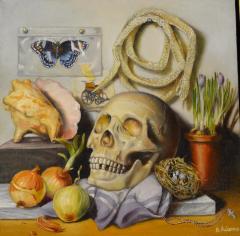 Oh That We Could Shed Our Skin and Begin Again