I'm a visual artist who works in several interdiscipilinary areas: both 2D and 3D formats using oils, acrylics, encaustics among other materials. In choosing the format for the artworks I'm drawn toward the media that best embodies and supports my idea. Often the works entomb cast-offs such as, peach pits, bullet casings, cigarette butts, insects, bones and dried fish into molten wax [encaustic]. This waxing of found objects or cast-offs carries a certain aesthetic or "look". This infusion of materials whether paint or wax lends itself to a wide range of tactile encounters. The processes in creating pieces often involve collecting and saving piles of objects and deciding on the best way to reconstruct or deconstruct them in works. Some recent pieces utilize throw-aways like floppy disks or food boxes as subject matter that comment on conditions of wastefulness, over-consumption and excessiveness in contemporary life. Other works incorporate an assemblage of found elements [teeth, bones, a hearing aid] which make statements of a conceptual and humorous nature. For example, Michelangelo's Molars which contain teeth I found in Tuscany. Who's to say they are not really Michelangelo's molars? The results of my works have a richness and depth to be explored on several levels. 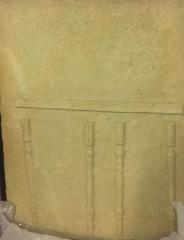