"Born in Glasgow, Steven Campbell (1953-2007), worked as an engineer for seven years before going to study at the Glasgow School of Art from 1978-82 as a mature student. Awarded a Fulbright Scholarship in 1982, he chose to study at the Pratt Institute in New York, and remained there until 1986, when he returned to Glasgow, moving out to a village in Stirlingshire in 1989. His first solo exhibitions were in New York and Chicago, before his work was seen again in Scotland in 1985. It had first been included in a group exhibition at Edinburgh’s New 57 Gallery, ‘The Vigorous Imagination’ curated by the artist and Glasgow School of Art Lecturer Alexander Moffat, who would also curate the seminal ‘New Image Glasgow’ exhibition a the Third Eye Centre, proposing a New Scottish School of figurative and politically-engaged artists, including Campbell, Ken Currie and Peter Howson. Campbell’s figurative style drew on a wide range of sources and imagery. The titles and content were often puzzling and paradoxical, yielding to no fixed interpretation, but suggesting connections between historical and contemporary settings, and illustrated with indeterminate actions by the protagonists. These figures were frequently clothed in tweedy suits, reminiscent of Stanley Spencer’s figures in his wartime ‘Glasgow Shipyards’ paintings, to whom Campbell gave Boys Own heroic gestures or Renaissance poses in setting from Dutch 17th century paintings. This frank mining of sources, combined with perplexing, almost dream-like narratives, sat on the edge of Surrealism, but never crossed over into the distortion of forms or to the realm of abstraction. Besides several solo exhibitions in the USA in the 1980’s, Campbell also held one-man exhibitions in Munich (1984), Geneva (1986), and Tokyo (1990). Also in 1990, the Third Eye Centre organised a major touring exhibition of his work ‘On Form and Fiction’, where the walls of galleries were completely tapestried with his paintings and works on paper. The exhibition was then seen in Llandudno (Oriel Mostyn), London (Marlborough Fine Art), Aberdeen (Art Gallery), Manchester (Whitworth Art Gallery) and Southamption (Art Gallery). In the same year, he was invited to be Artist-in Residence at the Art Gallery of New South Wales, Sydney, Australia." - http://www.marlboroughlondon.com/artists/the-estate-of-steven-campbell-2/ 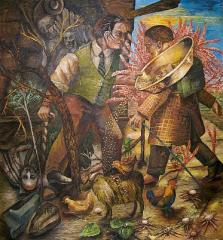