Originally from Ellsworth, WI, Sean Larson earned a B.F.A. in Ceramics from the University of Wisconsin-Stout and an M.F.A in Ceramics from the University of Nebraska-Lincoln. Sean's work has been exhibited and published nationally. Recent exhibitions include the Northern Clay Centers By Recommendation, Morean Arts Centers 2013, Functional/Dysfunctional, and NCECAs National Juried Student Exhibition in Philadelphia. During his undergraduate studies, Larson was also a gifted athlete, achieving All-American status three times in Track and Field, earning 4th place in the Hammer Throw, finishing as a National Runner-up in Weight Throw, and winning a National Championship in the Discus Throw. 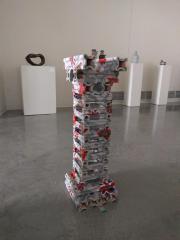