Kay Lahusen, also known as Kay Tobin Lahusen or Kay Tobin, is the first openly gay American woman photojournalist. Lahusen's photographs of lesbians appeared on several of the covers of The Ladder from 1964 to 1966. Her partner, Barbara Gittings, was the editor. Lahusen helped with the founding of the original Gay Activists Alliance (GAA) in 1970, she contributed to a New York-based weekly newspaper named Gay Newsweekly, and co-authored The Gay Crusaders with Randy Wicker. She adopted the surname "Tobin" as a pseudonym for a period of time, but apparently never legally changed her name. 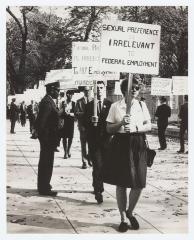