Roslyn Abbott Napanangka is a Loritja woman in her early thirties who began painting around 1992. As a child she received a European education at Hermannsburg and Papunya schools and in her later years has also studied at Bachelor College in Alice Springs. Although European education has had an influence on her life, she still prefers to live at Papunya Community where she enjoys keeping in touch with her family, her country, and her aboriginality. Roslyn paints women bush tucker and dancing stories as well as her father's dingo dreamings. 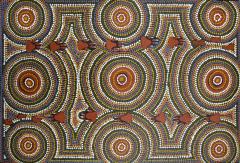