The matriarch of four generations of Passamaquoddy basket-weavers, Molly Neptune Parker began weaving baskets at a young age, using the scraps of ash wood that fell to the floor as her mother worked. Today, Parker leads efforts to share this tradition with young people, encouraging the continuance of this art form for generations to come. Born in Indian Township, Maine, in 1939, Parker is part of a family of basketmakers; her mother, grandmother, and aunts all made baskets. While the men would harvest and pound the ash used for basketmaking, the women in her family would strip the ash and split it into the correct thickness -- fine ash for fancy baskets and thicker ash for work baskets. In the Passamaquoddy tradition, families would have signature designs that were passed down. Parker continues to make baskets with ash flowers fashioned on the top, a design her mother and grandmother used. Parker is known for her fancy baskets, featuring intricate weaving techniques, such as her signature creation, the acorn-shaped basket. Basketmaking supports her livelihood, and has allowed her to buy a home and help pay for the education of her grandchildren, who are also carrying on this craft. A true tradition bearer, Parker continues her own efforts to preserve the basketmaking tradition among her community in the Passamaquoddy Tribe, including mentoring her grandson George Neptune. "Basketmaking for me is about innovation and creativity within the context of a traditional art form," says Parker. "The functionality, the materials, and the shapes have been a legacy for each generation. I honor that legacy and believe I have a responsibility to continue it, basing it always on our traditions and knowledge of literally thousands of years. Basketmaking is an art that I believe I was born to do, much as my ancestors have done for thousands of years." Parker has served as president of the Maine Indian Basketmakers Alliance and a master teacher in Maine Art's Commission's traditional arts apprenticeship program, and has demonstrated her craft at the 2006 Smithsonian Folklife Festival as well as local festivals and schools. She is a recipient of Maine Art's Commission Fellowship Award for Traditional Arts, New England Foundation for the Arts Native Arts Award, and First People's Fund's Community Spirit Award. 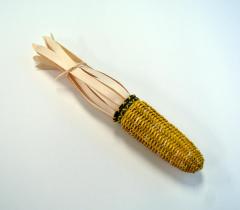