"Frederick Varley was born on January 2, 1881, at Sheffield, England. He studied painting at Sheffield and Antwerp and went to work in London as a commercial illustrator. In 1912 he came to Canada, where he found himself working in the same commercial studio as Tom Thomson. With Thomson and others he took to painting northern Ontario landscapes, but soon began to do considerable work as a portrait painter as well. In 1926 Varley moved to Vancouver to become Head of Drawing, Painting & Composition at the newly formed Vancouver School of Decorative & Applied Arts. Over the next few years he painted a number of very interesting portraits and some powerful west coast landscapes. At the same time, his interest in mysticism and oriental philosophy flowered, and his paintings took on a more meditative cast. In 1993 he founded his own school, the B.C. College of Arts, but this venture led him to bankruptcy in 1935, and in 1938 his marriage also collapsed. The next years were a difficult time for Varley, most of them spent suffering from alcoholism in Montreal. In 1945, however, he returned to Toronto and slowly began to work again. He died in Toronto in 1969." -Winn Devon Art Group and Canadian Art Prints 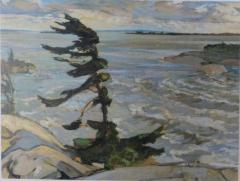