Zoltan Sepeshy was born in 1898 in the old medieval city of Kassa, Hungary, now Kosice. Sepeshy attended the Royal Academy of Art in Budapest studying under Szinyei Merse Pál, known among Hungarian painters as a precursor of French Impressionism, and graduated with a Masters degree in Art and Art Education. In 1921, Sepeshy migrated to the United States, living with his uncle in Detroit. It was there that he began his teaching career in 1926. He was appointed president of the Cranbrook Academy in 1959 (first joined in 1930) and is largely responsible for the full accreditation of the institution by the North Central Association. He is represented in some thirty-five museum collections throughout the United States as well as the National Academy in Budapest and the Museum of Tel Aviv, Israel. "This belief-that art arises from the common needs and aspirations of all men and that compartmentalization is a hindrance to its growth-this philosophy has motivated my teaching...and in fact made teaching itself worthwhile." -Zoltan Sepeshy 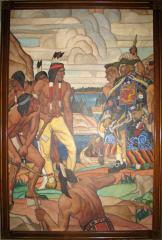 The Arrival of Jean Nicolet in Michigan in 1634