Allan Capron Houser or Haozous (June 30, 1914—August 22, 1994) a Chiricahua Apache sculptor, painter and book illustrator born in Oklahoma. He was one of the most renowned Native American painters and Modernist sculptors of the 20th century.

Houser's work can be found at the Smithsonian Museum of American Art, the National Museum of the American Indian, and the National Portrait Gallery in Washington, DC. and in numerous major museum collections throughout the North America, Europe, and Japan. Additionally, Houser's Offering of the Sacred Pipe is on display at United States Mission to the United Nations in New York City.

Oklahoma born sculptor Allan Houser, remained firmly grounded in his Apache roots throughout his lifetime and career as an artist. He created work that shares the story of his people, contributing to a uniquely American art history. In 1934, Houser went to Santa Fe to study painting in Dorothy Dunn's Art Studio at the Santa Fe Indian School. His career was launched with a commission in 1939 to paint murals in the Department of the Interior building in Washington, D.C.. During World War II, Houser and his wife moved to Los Angeles where he was exposed to and highly influenced by the modern art of Jean Arp, Constantine Brancusi, and Henry Moore. In 1948 Houser carved his first monumental piece, "Comrade in Mourning" from a solid block of Carrara marble. Houser taught for several years as the head of the sculpture department at the Institute of American Indian Art 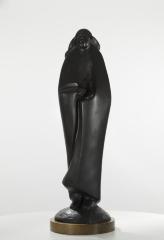