Ivan Fedorovich Choultsé (1877 – 1932) was a Russian landscape painter, who painted realistic landscapes and excelled in the depicting of winter landscapes. He was court painter of Czar Nicholas II.

He was born in Petrograd, Russia. His family name had the German origin Schultze. He studied art with Russian court painter Constantin Krighitsky, and exhibited his works for the first time in Russia at the Fine Art Academy in St. Petersburg in year 1903. Later he became court painter too. After the Revolution in 1923 Ivan Fedorovich Choultsé emigrated to France where he settled in Paris. Here he chose to use the French version of his name, Choultsé. In Paris, exhibited at the Salon des Artistes Francais. Choultse continued to paint landscapes depicting Russia while living in France.

He painted spectacular snow scenes in which the light seems to come from behind the canvas and glow. The critics scorned these pictures as photographic and called them non-art - but today this style of painting is called "magic-realism" and is much admired by critics and museum people. 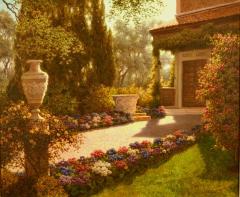