Friedensreich Hundertwasser was an Austrian artist who became one of the most well-known contemporary artists in Austria by the end of the 20th century. He led a turbulent childhood, losing his father at a young age and being forced to pose as a Christian during the Second World War (as his mother was Jewish); in addition to joining the "Hitler Youth" in order to remain inconspicuous during the war. After the war, he studied art at the Academy of Fine Arts in Vienna, and had become fairly well-known by the 1950s when he switched his focus to architecture. Hundertwasser's main artistic aims included pictorial art, environmentalism, philosophy and the designing of facades, postage stamps, flags and clothing. He was a fan of bright colors and organic forms while he rejected straight lines, calling them "the devil's tools". He coined a new theory to describe his work called "Transautomatism", which is based largely upon Surrealist Automatism, and which switches the focus of the art to the experience of the viewer rather than that of the artist. 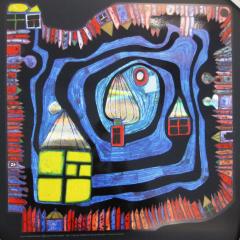 End of the Waters