The internationally renowned Cone Collection of modern art is the crown jewel of the Baltimore Museum of Art. In the early 20th century, Baltimore sisters Claribel and Etta Cone visited the Paris studios of Henri Matisse and Pablo Picasso and began assembling one of the worldâ€™s most important art collections. They acquired an exceptional collection of approximately 3,000 objects, which were displayed in their Baltimore apartments. The highlight is a group of 500 works by Matisse, considered the largest and most significant in the world. The sisters also acquired masterpieces by Paul CÃ©zanne, Paul Gauguin, and Vincent van Gogh, as well as a variety of textiles, jewelry, furniture, and African, Asian, and Near Eastern art. Baltimore Museum of Art 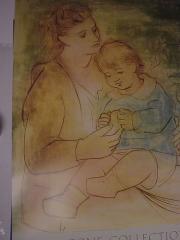 'Mother and Child' by Pablo Picasso