Max Kahn's place in American art today and his approach to his work have best been defined by the late Carl 0. Schniewind, Curator of Prints and Drawings at the Art Institute of Chicago, who wrote; "Max Kahn has not only long been one of the most respected among Chicago artists, but his name is also well known throughout the country." "He is a painter of real stature, one of America's leading print-makers, and an all too infrequent sculptor. Whatever medium he tackles he shows an unusually sound knowledge of the material with which he is working. His forms tend to largeness and simplicity, there is a conspicuous absence of anecdotal comment in his compositions, which emphasize the essential at all times. He is always an impeccable craftsman, whose craftsmanship, however, never out-weighs his artistic achievement. His talent and methods are, indeed, rare in our time" Kahn was born in Russia in 1902. He was brought to Peoria, Illinois, in 1907. He received a B.S. degree from Bradley College. In Paris, in 1927-28, Kahn studied sculpture with Bourdelle and Despiau, and drawing with Othon Friesz. He studied lithography with Francis Chapin at the School of the Art Institute of Chicago, where he himself was a lithography instructor beginning in 1944. 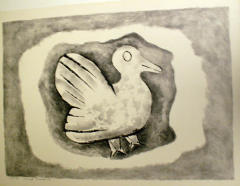