Printmaker Ron Wyffels received his bachelor of fine arts degree (BFA) from the State University College in Buffalo, New York in 1973. He went on afterwards to obtain his Master of Fine Arts degree (MFA) from Montana State University in Bozeman Montana where he finished in 1981. A vast amount of his experiences within the world of printmaking include printing lithographs while working at Landfall Press in Chicago Illinois between the years of 1973 and 1975. It was here that he studied under master printmakers Jack Lemon and David Keister. In addition these influences, he also collaborated with various artists such as: Claes Oldenburg, Jack Tworkov, Terry Allen, William Wiley, Chuck Close, Jacob Kainen and Alfred Leslie. The focus of his practice, however, resides in the quality of drawing, mainly emphasizing his intent in the tactile quality of the piece. Whether working on stone, paper, or plate, establishing meaning or not he focuses his effort and immerses himself in the attempt to make order of the marks that he is producing. Through this practice, Wyffels is able to create both representational and abstract forms within his work. Wyffels is also know for establishing the lithography studio known as Stone Roller in 1975 where he worked as director and Master Printer of crayonstone lithographs. His work is exhibited in galleries across the country in both solo and group shows. Many of them are located in Pennsylvania such as the Rodger La Pelle Galleries, the Woodmere Art Museum, the Pennsylvanian Academy of Fine Arts, West Chester University, the Philadelphia Art Alliance, and the Paley Design Center at Textile College. To create his work he has made use of grants to fund his work. He has received several throughout his practice, which include the N.J.S.C.A. Visual Artist Fellowship Grant in New Jersey (1985), the NEA Visual Arts Fellowship Grant from the National Endowment for the Arts (1983). He has been an associate professor at the Pennsylvania Academy of Fine Arts since 1984 where he has been teaching drawing, lithography and continuing education courses for the past 25 years. In addition he is also a Critic in the Certificate/BFA program within the department, has been a member of the graduate faculty since 1992, and currently Chairs the Post-Baccalaureate Program at the University. All in all, Ron Wyffels is a skilled printmaker and teacher and the best way to describe his practice is through his own words: "I'll simply describe my art making activity by saying that it is a combination of seeing/ thinking/ making based upon discoveries, observations, and experience." 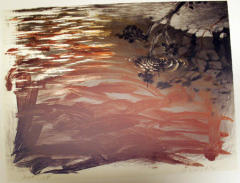