â€œThe final test of a painting, theirs, mine, any other, is: does the painter's emotions come across?â€ Franz Kline was an American painter mainly associated with the Abstract Expressionist painters who were centered, geographically, around New York, and temporally, in the 1940s and 1950s; but not limited to that setting. He was born in Wilkes-Barre, Pennsylvania, attended Girard College, an academy for fatherless boys; attended Boston University; spent summers from 1956-62 painting in Provincetown, Massachusetts; and died in New York City of a rheumatic heart disease. As with Jackson Pollock and other Abstract Expressionists, he was labeled an "action painter" because of his seemingly spontaneous and intense style, focusing less, or not at all, on figures or imagery, but on the actual brush strokes and use of canvas. For most of Kline's [mature and representative] work, however, as the phrase goes, "spontaneity is practiced". He would prepare many draft sketches â€“ notably, commonly on refuse telephone book pages â€“ before going to make his "spontaneous" work. 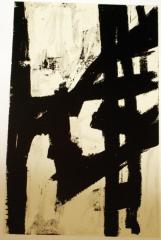