Eishi Chobunsai was the eldest son of a samurai family, belonging to the Fujwara clan in Edo. He first studied painting with the official teachers of the Kano school, then became a household official and court painter in the service of shogun Tokugawa leharu (1737â€”1786). At the age of thirty, he resigned this socially highly respectable position and turned to the popular ukiyo-e style of painting. The female form was a popular theme in Chobunsai's work, either depicting women in idyllic settings or the courtesans from Yoshiwara. Chobunsai's works includes shunga (erotic pictures) as well as prints with themes taken from Japanese and Chinese mythology. His most regarded pieces were those full of elegance, usually centered around aristocratic nobles. In some cases these pictures were so highly regarded that they were even shown to the imperial family. 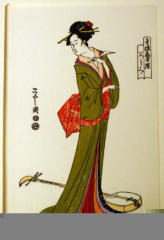