"The average American spends more than four hours a day watching television. Thatâ€™s one fourth of a waking life, 28 hours a week, 60 days per year, and 12 years of a lifetime. Television provides a pseudo-reality that is confused with lived experience. This confusion persuades viewers of false assumptions and consequently molds identity and culture. Filled with advertisements that provide prescriptions for behavior, beliefs, ideals, morals, and identities, television offers the consumption of simple material objects as the solution for the most complex of problems. These images juxtapose a product or material object with a television image to challenge the underlying messages of television programming. Each photograph challenges a particular persuasive claim that television asserts through constructs of identity, environment, race, gender, class, age, etc." -Jamie Black 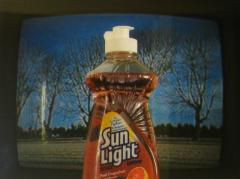