Frederic Edwin Church was an American landscape painter born in Hartford, Connecticut. He was a central figure in the Hudson River School of American landscape painters, and while committed to the natural sciences, he was "always concerned with including a spiritual dimension in his works". The Hudson River School was a mid-19th century American art movement embodied by a group of landscape painters whose aesthetic vision was influenced by romanticism. The paintings for which the movement is named depict the Hudson River Valley and the surrounding area, including the Catskill, Adirondack, and the White Mountains; eventually works by the second generation of artists associated with the school expanded to include other locales. 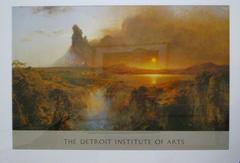