Eduardo Paolozzi was a Scottish sculptor and an artist. He went to many schools before graduating and began to know various artists. He later had a studio in Chelsea which became full of sculptures and art supplies. He would use anything around his work area as reference, even his colleagues. He later began to teach at various universities. 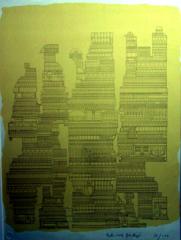