Vibert's early work focuses on dramatic, serious subjects; such as Christian figures and mythology. In the 1867 the subject of his artwork shifted to include more nationalistic subjects. In 1870, Vibert was wounded in the battle of Malmaison. This event pushed his work to focus more on satire and comedy. In 1878, Vibert acchieved popularity with his painting "The Apotheosis of Mr. Thiers". In his later life, Vibert turned to the clergy, and his works once again retained a more religious focus. 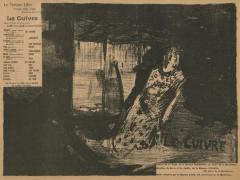