French writer known mainly as the creator of UBU ROI, first produced by AurÃ©lien LugnÃ©-PoÃ« in Paris in 1896. Jarry was a forerunner of the Theatre of Absurd (see Beckett, Ionesco, Pirandello, Genet and others), writing his works in a Surrealistic style, and inventing a pseudoscience or "science of imaginary solutions" which he called 'pataphysique. Jarry once stated: "Laughter is born out of the discovery of the contradictory." Jarry's other works include stories, novels, and poems. 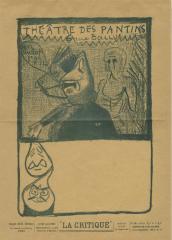