Victor Joze (Text)Henri de Toulouse- Lautrec (Illustrations) This poster was designed to publicize Victor Joze's notorious novel of lust and prostitution, Reine de joie, moeurs du demi-monde. The poster was commissioned by the author, a friend of Lautrec's whose real name was Victor Dobrsky. The image also appeared as the title page of Fin de SiÃ¨cle magazine's issue of June 4, 1892, as an advertisement for this infamous book. Despite the commercial purpose, this was one of Lautrec's first posters to receive serious critical attention as a work of art. The gold-digging heroine of the work, HÃ©lÃ¨ne Roland, is shown planting a kiss on the cheek of the fat banker Olizac. The characters are shown in the tradition of the ill-matched pair - a young, sensuous woman and a lecherous old man, each using the other for a purpose. The man plays the fool, and Baron Rothschild, believing himself to have been portrayed by Joze as Baron de Rosenfeld, tried to confiscate both the novel and the poster. By then, however, the image was known throughout Paris. With his usual sharp wit, Lautrec draws an analogy between the curving figure of HÃ©lÃ¨ne and the shapely glass wine ewer on the table, which seems to pucker its spout toward the heraldic shield on the plate set before Olizac. The pun is obvious, and again derives from an artistic tradition in which vessels appear as bawdy allusions to the female body. 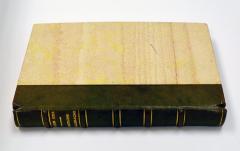