River Gallery121 S. Main St.Chelsea, MI 48118734.433.0826fax 734.433.9731 Gerome Kamrowski was one of the few American artists to be included in Peggy Guggenheim's The Art of This Century Gallery in 1943. He also had shows at Museum of Modern Art in New York 1951, Hirshhorn Museum and Sculpture Garden, and at the Whitney Museum of Modern Art at several occasions. His work can also be seen in the Joe Louis Arena station of the Detroit People Mover. He showed his work in the 1947 International Surrealist Exhibition in Paris. He was invited to the Paris exhibition by surrealist leader Andre Breton. AndrÃ© Breton would say of him, "Gerome Kamrowski is the one who has impressed me the most by reason of the quality and sustained character of his research." In 1948 he moved to Ann Arbor, Michigan to teach at the University of Michigan School of Art. He stayed at the University of Michigan until his retirement 1982. Very few of his students over the next fifty years realized that their teacher was one of the most important artists in America. Gerome Kamrowski worked every single day at his art. He created massive domes of oil on canvas and brought strange, beaded animals to life. His work balances fluid automatism with powerful abstract imagery. The many layers of paint created a visual maze that clearly communicates an intuitive language with the viewer. 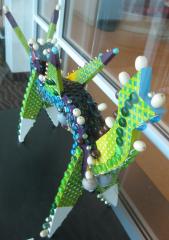