Ammi Phillips is a self-taught New England portrait painter and is regarded as one of the most important folk artists of his era. He was born in Colebrook, Connecticut, and began painting portraits as early as 1810. He worked as an itinerant painter in Connecticut, Massachusetts, and New York for five decades. In 1924, a group of portraits of women were displayed in an antique show in Kent, Connecticut. The anonymous painter of these strongly colored works, which dated from the 1830s, became known as the "Kent Limner," after the locality where they had come to light. Stylistically distinct from those of the "Kent Limner," a second group of early-19th-century paintings emerged after 1940 in the area near the Connecticutâ€“New York border. Attributed at the time to an unknown "Border Limner," these works, dating from the period 1812â€“1818 were not identified until 1968 as the works of Ammi Phillips. Additional works were identified, and by 1976 there were approximately 400 paintings securely attributed to Phillips who is now recognized as one of the most prolific American folk painters of his time. 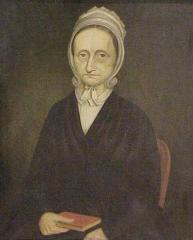