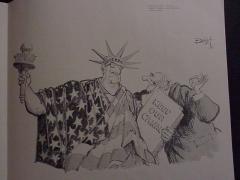 Terrific, Senator...but You Forgot the Apple Pie and a Picture of Your Mother