Edward Willis Redfield was an American Impressionist landscape painter and member of the art colony at New Hope, Pennsylvania who was born in 1869 in Bridgeville, Delaware. He is best known today for his impressionist scenes of the New Hope area, often depicting the snow-covered countryside. These impressionist landscapes are noted for their bold application of paint and vibrant color. He painted en plein air, directly from nature rather than in a studio. He would often carry a large canvas into the snow, set it on an easel, and vigorously paint an entire scene in one standing over the course of a day. Redfield showed artistic talent at an early age, later studying at the Pennsylvania Academy of the Fine Arts in Philadelphia before traveling to France to study at the AcadÃ©mie Julian and the Ã‰cole des Beaux-Arts. 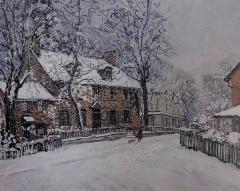