Raoul De Keyser (born in 1930) is a Belgian painter, who lives and works in Deinze (Belgium). He has had solo exhibitions in Bern and Frankfurt (1991), and regular exhibitions in Antwerp, Berlin, Munich, New York, Vienna and elsewhere. He has been included in major international group exhibitions. In 2004, a retrospective of Raoul De Keyser's paintings was held at the Whitechapel Gallery in London, and toured in the summer of 2005. At the end of 2006 there was a large overview of his work at the Museum of Fine Arts in Brussels, Belgium. His work is held in the collection of the Museum of Modern Art, among many other public collections. 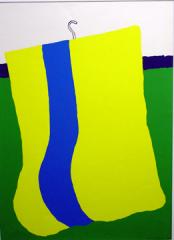