Bio: (Article) â€œâ€™New Snowâ€™ A Limited Edition, Signed Original Lithograph by Ernest Fiene. Briefly concerning the artist- Ernest Fiene began the serious study of art in Europe at the age of twelve. At seventeen he came to the United States, completing his art studies at the National Academy of Design, Art Students League, and the Beaux Arts Institute. Famous collectors- Rockefeller, Clark, Kaufman,-own his canvases. A vast mural of the needle trades industry was commissioned to him. Since 1922 he has had fifteen one-man shows, is included in all important exhibitions throughout the country. He received a Guggenheim Fellowship in 1932. Two of his lithographs are reproduced in the lithographic section of the Encyclopedia Brittanica. He is represented with works in the Boston Museum of Fine Arts, the Art Institute of Chicago, the Denver Museum, Fogg Art Museum, Los Angeles Museum, Newark Museum, Whitney Museum of American Art, New York Public Library, Darthmouth College, Columbia University, Ohio University and the Mia Collection, Japan.â€ 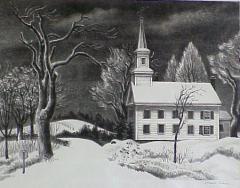